Where Shall We Place Our Hope?

After sobbing my way through this last night, I was just mentally staggering through the day, and so glad of the distraction when the NYRB came through my postbox. 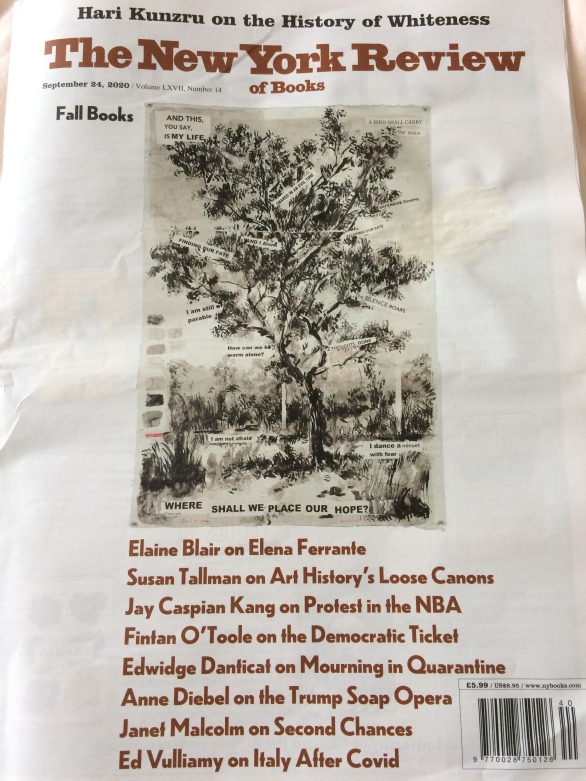 Always a delight to receive with its plethora of articles and reviews but the frontispiece by William Kentridge really grabbed me. Where indeed shall we place our hope? 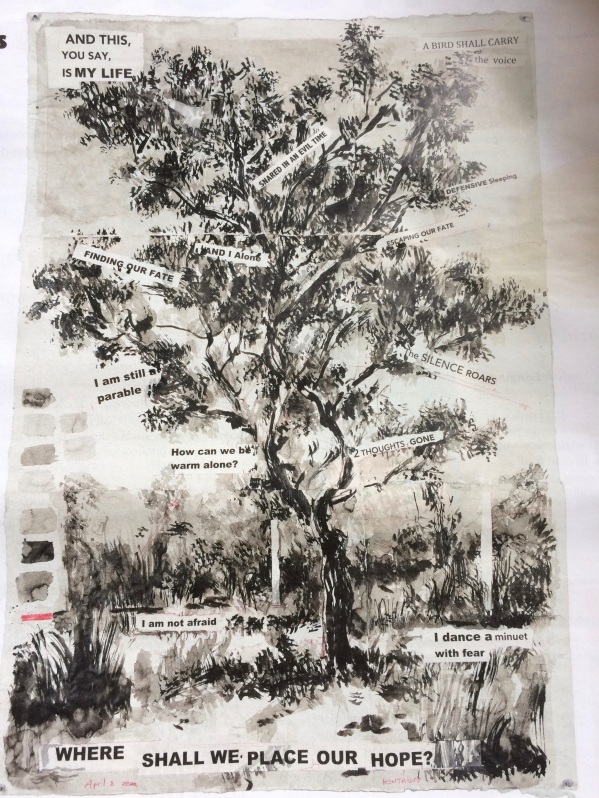 But every phrase here seems to speak to me. “Defensive sleeping” – I’ve been doing a lot of that lately. And yet “a bird shall carry the voice”. I hope so. I know I’m not alone in pendulating between hopelessness and despair over living through the sixth wave. Sometimes writing feels like a total self-indulgence in the face of what we are living through. But I don’t know what else to do besides the pathetically ineffective attempts I make to live lightly. Which is why the government’s threats to make Extinction Rebellion a criminal organisation is utterly outrageous. As others have said XR is our conscience.

The only comfort for me is to remember that life on earth has undergone 5 previous mass extinctions and recovered eventually. It’s a fairly dispiriting comfort given the suffering and loss that will have preceded it, but I keep trying to tell myself, I’m not in charge of this. I can’t stop it. Mourning is a permanent state of being.

But birds were one of groups of that survived the last mass extinction that marked the K/Pg (K/T) transition (the before and after of the asteroid 65.5 mya) so William could be onto something. And Emily Dickinson did say that Hope is the thing with feathers.

Some great stuff inside the NYRB as well as on the cover. I’ve already devoured Ruth Franklin writing about Eimear McBride, and looking forward to Elaine Blair on Elena Farrante. I will eventually steal myself to read Fintan O’Toole on the US election. And I’ve semi-read Martin Filler on Eileen Gray. But a surprising read was Janet Malcolm’s essay ‘A Second Chance’ about being sued by Jeffrey Masson in the 1990s. So much of it struck a chord, in terms of her presentation at the initial trial, which went against her, but then collapsed. So there was a re-trial and in the interim she basically got coached in how to present herself and defend herself. And the next time, the jury found against Masson.

It made me think about my own inability to defend myself when I was involved in a legal process some years back. Like Janet in the first trial, I too took the high road, didn’t respond to attacks and false portrayals, saying “nothing in my defense. Nothing at all. Nothing of course produces nothing, except further confirmation of guilt.”

I was guilty of nothing other than being trapped in a situation where I had very little power and enormous responsibility. And those responsibilities – essentially the lives and reputations of others – made it impossible for me to defend myself effectively. And that was exploited. Lies were told and apparently believed. So it was good to read Janet’s article and have it reaffirmed that my glacial silence was not protective. Of course, in a different context, Audre Lorde warned me of that years ago.

I’m writing this now, because while the circumstances that I was unfortunate enough to find myself in, while not like Janet’s, did negatively shape my life for many years. And the feelings of powerlessness it evoked are not too dissimilar to those that I feel in the face of environmental catastrophe.  So maybe that’s why the article spoke to me today. Maybe it’s also because I am, and I hesitate to write this, but it is true, in the last stretch of the second draft of the novel that I’ve been working on for so many years (part of the reason it has taken me so long are the circumstances that led to and the fall out from said legal process. I lost years). There will be a third draft, and god knows if the final version will ever be published so it’s still gonna be a while before it (ever??) sees the light of day. But I am beginning to look around and see what I might write next. I have to manage my chronic pain (the physical damage that causes it having been incurred in said circumstances as well) so I’m never going to be prolific (says she, as if she has been!). And I have a poetry collection, bird-focussed, that I have to finish as well.  But the second chance idea is something that attracts me (tho’ Mary Oliver warned me sternly of that years ago – I’ll find that quote some other time!). And Anne Lamott said “every single thing that happened to you is yours and you get to tell it. If people wanted you to write more warmly about them, they should have behaved better.”(!) Anyhoo. Of course, writing is a made thing, so form is vital. But I’m thinking.  I have things that happened to me that weren’t right. It’s my story. Janet Malcolm got ready for her second chance. She prepared and it worked for her as result.

I think I might be thinking about getting ready.

This entry was posted in Uncategorized. Bookmark the permalink.